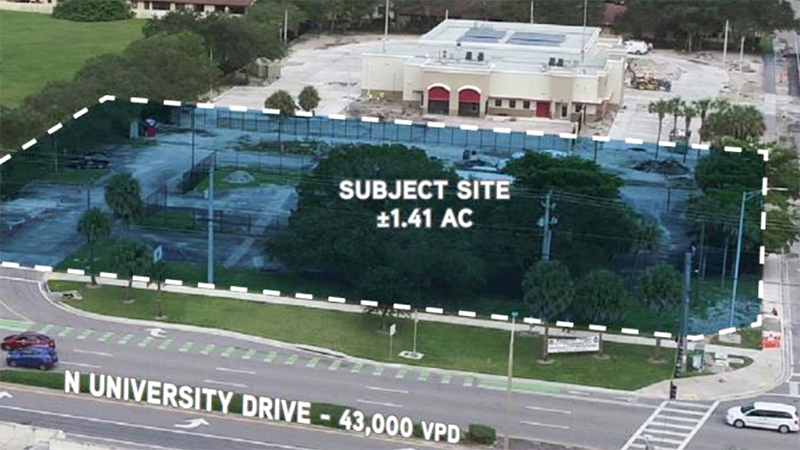 A new plaza on University Drive will include a rooftop garden and lounge, upscale restaurants, and high-end shops after the Tamarac city commission agreed to sell a parcel of land to the Vida Garden Plaza LLC developer.

At the March 23 meeting, the city’s economic development manager Lori Funderwhite explained that the developer was selected by the commission last year due to the city-issued request for proposals to find the best commercial redevelopment project further revitalize the Medical Mile District.

The vacant land at 7200 North University Drive is “leftover” from the 3.41-acre parcel the city initially purchased in 2014 for $1.2M. The site was used to build a new Fire Station 36. Formerly, it was the site of a Picadilly Restaurant.

“By selling a 1.41-acre portion of that land to the developer for $1.05M, the city will recoup nearly 90% of that initial investment,” said Funderwhite, adding that the project will have a positive economic impact by bringing new jobs, expanding the commercial tax base and inviting vitality to the redevelopment area.

She explained that the development includes two upscale restaurants, approximately 2,400 square feet, on the ground floor and a rooftop terrace. The retail space of 9,600 square feet is big enough for 5-6 stores or businesses.

The developer is a Miami-based company with a successful track record of building, owning, and operating restaurants and retail businesses in Florida and New Jersey.

Funderwhite added that the developer agreed with the city to proffer $500K to community charities and homeless programs over five years once the construction is complete and the business is operating.

Mayor Michelle Gomez said that while she appreciates the developer’s desire to support the city’s charities, however is concerned that having such a large sum in the contract between the city and the company may deter future developers who consider doing business in Tamarac and might think that this is what is expected of them.

“Charity is not the bad thing, don’t get me wrong. But offering $500K over the sealed bid price might create a “chilling effect” on other businesses who may want to come into the city,” she said.

Owner Michel Bittan assured the mayor that his company consistently invests in the cities where they operate.

“I would have invested in the local charities with or without the contract with the city,” he added, which Gomez said made her feel better.

Commissioner Debra Placko asked Bittan about the concept of the project and whether the music on the rooftop of the future restaurant might be affecting the nearby residential area and the Fire Station.

Bittan said that the restaurants and the lounge would be similar to the ones the company owns and operates in New Jersey, but to Tamarac’s specifications.

“As we learn more about the area, and now that the land sale is approved, we will create an upscale plaza but in a way that suits the community,” he said, adding that the company hopes to attract fashion businesses, shoe stores, and beauty salons as tenants to complement the overall concept.

Addressing the noise concerns, Bittan said the business tries to keep the outside music low at its existing locations and follows the city’s rules and regulations.

Funderwhite explained that the land sale agreement is only the first stage. The developer will now have to go through due diligence inspection and government approvals, get the project and the site plans approved by the city, and hopefully start construction in 2023.

Amid wealth and tech surge, two jobs still necessary for many in Miami-Dade